The English and Children (from fiction in progress)

We took the child on a river boat, and to the Tate gallery to see the Blakes. He pointed to "Ghost of a Flea" and shouted.From there we wandered through Battersea park and finally to the white stone church where Blake was married. On a path outside the church the child stamped and scuffed his feet on the gravel to make a noise. "This is a cycle path" mumbled a middle-aged man on a bike with muffled rage. 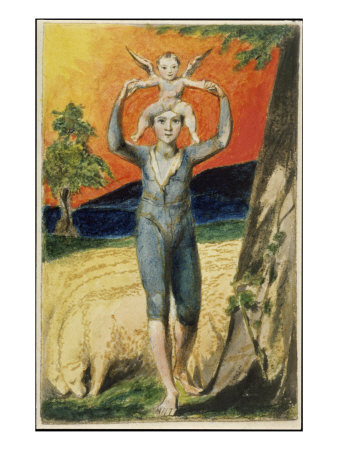 The English in fact hate children. You only have to travel to Greece or Italy or Spain, where the baby or toddler in a restaurant or other public place is the star of the show, a VIP, an entertainer applauded and feted by all. You only have to witness the delight of the waiters and shop workers, suddenly lit up and animated by the prodigal presence of the child, and who always meet the baby half way, as it were, and become babies themselves, to realise that, by contrast the English resent and are embarrassed by children and wish them invisible, inaudible or unconscious. Of course, their hatred wears the mask of concern, or the muzzle of concern, as in “that baby should be asleep!,” or “They shouldn’t be letting it behave like that..” and so on. They "blame the parents” and can be heard sniping at the parents from adjoining tables, barely audible of course, for most of their cancerous bile is directed inward, to their own organs,  where, with other monsters, it festers and mutates. They cannot admit to themselves they hate children, for that would amount to confessing that they hate life. But this is exactly what the English do hate. The vitality and exuberance of the baby, or the wobbling toddler, circling in gleeful triumph around the listless ironic adults, shrieking and laughing, screeching and crying, are the stream and bubble of life in its pure state. The shriek of a toddler is an arrow of pure life fired directly between the torpid eyes of those who long ago sent the child they once were to rot in exile.


Genius is the voluntary reclamation of childhood, Rimbaud says, by which he means not the memory of childhood, a la Proust, but the plastic powers of childhood to perceive, play and create. If we can retain these powers, invoke and use them, then we are geniuses. A genius sees the world differently and walks roughshod over the established symbolic parameters, which is also what the child does. The small child spends much of its time in a state of sweet delight, as Blake knew. It notices that a piece of wood makes pleasant sounds when hit against a wall or a cupboard; a tennis ball is better employed knocking over a glass; a small drawer’s contents can be scattered over a large area; doors are for slamming, and a switch makes a pleasant click which can also plunge the world in darkness or call up from nowhere a small room which adults call a “lift.” Each day there are Olympian leaps of the understanding, jubilant discoveries, new creations and ecstatic destructions. What a life to live, this exponential and daily increase in the body’s powers, the collapse of familiar boundaries, and, even within the wall of house and garden, an ever-expanding universe...


All of this, for the English, is to be extirpated, re-programmed and subject to regimentation.  Children in all their fabulous innocence are labelled miscreants from the start. They are naughty or possessed or hateful. Original sin is simply the sin attributed to children by adults, the labels and symbols used to defame the exuberance of the child, which properly understood and heard would corrode their Englishness as salt dissolves a slug. For it is not unfair to say that Englishness is, point by point, the antithesis of childhood. Everything that the child incarnates, in the way of joy, unstopped desire and piping glee, is then drained away by the cultural apparatus of Englishness, and replaced with repression, glumness, irony and resignation. The laughter of a child and that of an Englishperson are completely different, if not the exact reverse of each other: the one affirms and spills over, the other denies and drains.
Posted by Mark Bowles at 03:01 No comments: