A Thought on Thomas Bernhard (or, "It is not about something" ii) 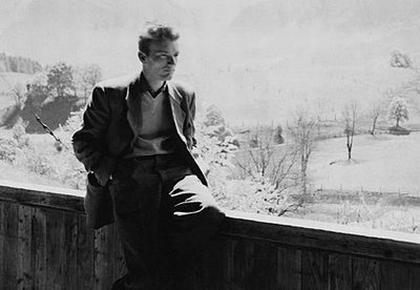 Think of the ripples and circles that an erratic breeze traces on the surface of a pond. One could photograph these brief glassy shapes and try and read them as signs. Or one could recognise that they were the tracings of an invisible force. Kram Selwob

This piece of whimsy might apply to literature. The ‘lyrical imprecation’’ of Thomas Bernhard’s prose, for example, is first of all an unrelenting and vexing energy, a circling circuitous intensity, a rising madness.. and this vexing energy is extended completely through each word and comma, not something which is poured indifferently into that prose vessel or this.


Of course, Bernhard’s prose may be ‘about’ Austria, the ‘mind-set of rural communities’, the “black woods and deafening hill streams of Carinthia”*, but these are perhaps less what the work is about and more materials that the Bernhard creative machine has ingested, metabolised.

Where there is an ‘intention’, where there is a ‘something’ that writer wants to ‘address’, these things are combustible too, they are confiscated and destroyed by the work itself, by a momentum which has arisen, in a sense, out of nothing, which exceeds and transforms ‘intentions’ and ‘subject matters’ according to immanent and unforeseeable demands.


His sentences are oar strokes that would propel him forward if it weren’t for the powerful current. Sometimes he pauses, falls silent and listens, as though to check whether his present situation might not have been replaced by its successor.  (Frost, via here)


Beginning with our earliest flickers of intelligence we have to explore intently our chances of making this world, that's been put on us like a worn, shabby suit of used clothes much too tight or much too large but in any case a shabby and torn and ragged and stinking outfit handed to us, as it were, off the world's rack, we must explore the whole surface of our world and its subsurface, and keep probing it deeper and deeper, so as to discover our chances of making this world which is not our world, our own after all, our entire existence is nothing but concentrating on such chances and on how, in what way, we're to change this world which is not ours, ultimately to change it, so Roithamer. And the moment of this change, such a moment is followed by the next and so forth, must always be the right moment, so Roithamer. So that we can say at last, at the end of our life, that we have lived at least for a time in our own world and not in the given world of our parents. But ninety percent of us die without ever having lived in a world of their own, only and always in a world that was ready-made, presented and adapted to them by their parents' generation, never, please note, in no way and never in their own world, they live and work out their lives in their parents' world, not their own. (Correction)