The 'emptiness of literature'. 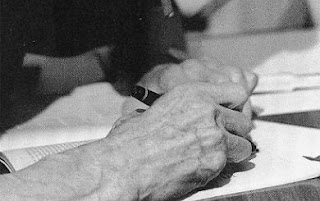 “Anyone can put them on, anyone can fit into them.”

“I was reading Beckett when I had the thought. He drills down into himself, each comma and clause cutting further in, 'delving deeper and deeper in its bite', each word burrowing deeper into what you would think was the silent private core. His words are an ongoing investigation into precisely what's his and no one else's, he's doing verbal justice to this very particular silence."

“- Except that thousands of us who are not him, who are not even Irish Protestants born in the early 20th century, or émigrés, can read these words and be gloved in them exactly, can follow with him each comma and clause, and find that the movement of the words agrees completely with their own.. well, what’s the word.. inclinings? Anyway, they’ve left Beckett behind, these words we read. They’ve escaped. They’re out zigzagging from reader to reader, illuminating the recesses of other dark souls.

“So it’s as if the writer had made a kind of cast of his thoughts and affects using words and syntax and ellipses, and this cast now magically fits everyone.

“It’s no big deal is it? You're stating the obvious.


“Just because it’s his chair doesn’t mean that anyone can’t sit in it.


"If a writer describes anguish it’s not his anguish, but a kind of empty form that can fit anyone’s anguish, or many people’s anguish. It has disrobed itself of the accidents of individuality. And this is because if you look at the individual face closely enough, it becomes a portrait of anyone. It’s do with universality.

.“But Beckett’s world is so strange, and claustrophobic, and asphyxiating sometimes. It’s clearly not a portrait of most of us is it? I mean, he’s looking at the human community from another place. The individual words he uses might be common currency, but what the words make audible is a voice from the outside, from a place we’ve never been. If it’s universality it’s a reminder that most of us never touch the universal. Maybe that’s it; maybe the universal is something you have to fight your way through to. Most of us never do.

“I think the misleading word is ‘describes’. The writing doesn’t draw the outline of an anguish or boredom that’s already there. The anguish and boredom are connatural with the writing. They are created by it. They escape the writer then and there, not after publication. They’re not ‘universal’ if you mean the same old anguish in different clothes. They are highly individual without being at all personal. When I first read Beckett it wasn’t that he gave me a brilliant portrait of an age-old human neighbourhood. What I got from Beckett was and is the shock and depersonalisation we experience when something foreign enters our veins.When we are removed from the ground upon which, bored, we stood too long.