A dog, with a small triangular head, entered the cafe, accompanied by its owner. The owner ordered a latte and waited outside, leaving the dog behind. The dog closed its eyes and shuddered. It walked over to M. and sniffed his leg. M. commited to his notebook this unremarkable event. 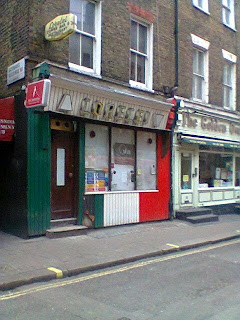 Fifteen years ago M. had lived in Soho, above a vegetarian restaurant on Greek Street, in a small bedsit, next to the mysterious Beatrice. Sometimes he would go round to Beatrice’s flat, and drink and talk until the morning sun told them it was time for bed. She was visited by strange men with names like Luton Tony and South End Mick, or a genial baby faced ex-con called Bob, half Ray Winston half Jean Genet, a copy of La Rochefoucauld in his pocket and a sack of improbable anecdotes.

Faces that time threw up and snatched away. What had happened to Luton Tony or Bob, M. Wondered, or indeed to that earlier version of himself, inexplicable boozy and sociable, returning home after teaching with a stash of Belgian beer, playing chess or meeting people at Cafe Amato?

The vegetarian restaurant was no longer there, and it seemed also that the M. who had lived above it then was stranded in the past, unreachable, another being, animated or defined by different habits. He, by contrast, was marooned in the present with no access to his past.
Posted by Mark Bowles at 14:12