Having just read Deleuze’s Dialogues, I’m regretting not taking notes.  This is because some thoughts only arise on first reading. These are evanescent thoughts. Unless you manage to name and clarify them there and then you will lose them. There is no point in saying ‘I will come back to them’. They do not belong ‘in the text’ like seams of precious metal. You cannot return to them or repeat them. They are thoughts of the initial encounter only and exist only at the surface of that encounter. (Just as there are thoughts and affects which arise only the first time one visits a foreign city.)
Posted by Mark Bowles at 12:14 No comments:

The body: "A being from a different realm" 'It is in sickness that we are compelled to recognise that we do not live alone but are chained to a being from a different realm, from whom we are worlds apart, who has no knowledge of us and by whom it is impossible to make ourselves understood: our body'

I wonder to what extent this sense of the body as something foreign, and almost inhuman, is a relatively modern one.

Of course, there is something superficially similar in other literatures, the Jacobeans for example. But John Webster’s perception that “continually we bear about us A rotten and dead body” is something different. It carries with it not just disgust (in itself lacking from Proust or Rilke) but repugnance, a moral category. It seems to presuppose the body/ soul separation. It seems to be connected to the decay of the old Order, as if the sinful, mechanical, ‘box of wormseed’ that is the body stands revealed in its horror just as the  ‘Elizabethan World Picture’ recedes.

Indeed, Webster’s ‘skull beneath the skin’, the body as death’s machine - Is this body even really a foreign presence? Isn’t it rather a reminder of a Death all to familiar to the Elizabethans and Jacobeans?

The body ‘discovered’ by Proust is something else. I am not at home in my body, I do not coincide with my body, but this isn’t simply because my body is matter rather than soul. Rather, the body is a foreign form of life.

The substratum of our conscious existence, our familiar and chosen world, is this Thing with its own silent, imperturbable drives, imperatives. In sickness we feel subject to it, that it is bubbling away in spite of, or at a level indifferent to our conscious life with its acquired meanings and projects . Its motions are not human motions; they are not steered by intention.

Its my feeling that there are certain modern writers who feed off this corporeal foreignness. They feel its proximity - the Other lodged inside, with whom dialogue is impossible. These writers are: Proust. Kafka. Rilke.

Are these not writers who see, even, a certain pay-off in sickness and somehow engineer this condition of sickness for themselves, so that they might live in proximity to this Other, live in symbiosis with it?

But what possible advantage is to be gained from such proximity?


‘… one day, noticing a swelling in his stomach, he felt genuinely happy at the thought that he had, perhaps, a tumour which would prove fatal, that he need no longer concern himself with anything, that illness was going to govern his life, to make a play thing of him, until the non-distant end.’ (Proust)

Is it that sickness removes them from the duties of everyday life, so that one is excused from certain symbolic obligations. And this place of excuse and exclusion is the ideal place in which to write. It is a place outside the human community. To make the foreignness of the body your home is to make the human home foreign.

‘At night, when I withdrew into my lungs, into my intestines, into the last bare chamber of my heart’ (Rilke)

Proust in his corklined carapace, Kafka in his burrow, Rilke secure in the hut of his sickness: these writers have removed themselves from the human community, watching now from the opposite shore.

The phrase ‘human community’ is Kafka’s, as are the following quotations:


‘Accept your symptoms, don’t complain of them; immerse yourself in your suffering.’

‘It was as though, through all these years, I had done everything demanded of me mechanically, and in reality only waited for a voice to call me, until finally the illness called me from the adjoining room and I ran towards it and gave myelf to it more and more.’ 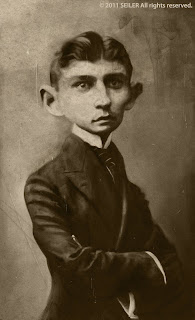 The retreat into the body is a movement from the world (The Human community) into an inhuman solitude which Kafka insisted was the precondition of his writing (‘I need solitude for my writing; not like a hermit, that wouldn’t be enough – but like a dead man’.)

The ‘human community’ I have always thought an extraordinary phrase, because it so casually implies that K. himself is the adoptee of this ‘community’, not a genuine offspring. And perhaps this is why, in a strange way, he allies himself with that inhuman saboteur, his body – the being from a different realm.

“I strive to know the entire human and animal community, to recognise their fundamental preferences, desires, and moral ideals, to reduce them to simple rules, and as quickly as possible to adopt these rules so as to be pleasing to everyone. In short, my only concern is the human tribuneral,” Letters to Felice (1/10/1917)
Posted by Mark Bowles at 12:03 No comments:


From a review of Sartre’s War Diaries:
Sartre is not observing this fellow human being, but adapting him, making of him an instant philosophical villain.

A very common motif in writing about philosophers is a certain image of the relation between ‘ideas’ and ‘life’. The usual story is that the philosopher will use people and situations in order to ‘illustrate’ ideas, i.e., they, philosopher,  do not see people in their immediacy but see through them to abstract intellectual preoccupations. This common line of thought posits as it own presupposition a curious notion of what ‘ideas’ are. (And what 'life' is). Ideas are already assumed to be as abstract, removed from life and impractical as the philosophers who think them.

This is a lazy and impoverished notion.

What Deleuze says he encounters in Michel Foucault is not, directly, a person, but a ‘set of chiselled sounds’, ‘abrupt conclusions’, various speeds and movements, an austere and controlled violence, impersonal particles grouped together under a proper name. Foucault’s gestures and movements constellate a new concept  for Deleuze – that of ‘pre-personal singularities’. In other words, the encounter with Foucault is at the same time the encounter with certain ideas in their immediate form.

Ideas are not something fabulated in the laboratory of the head and then projected onto a rather mundane, otherwise neutral 'life'; rather are ideas immediately present in the encounter with people and objects. They are immanent in the world and ambush us from the outside.
Posted by Mark Bowles at 12:52 No comments:


There is a nice article by Matthew Parris in The Times this weekend reflecting on the same-sex marriage vote. He suggest that those who vote no will one day blush as the lights of history shine on them, just as those who voted against the decriminalisation of homosexuality in 1966 might now be puzzled or simply ashamed by their actions.

In order to strengthen the point Parris quotes Leo Abse from 1966:


"It would be as well, perhaps, to remind the house of other occasions on which legislation which impinges upon human relationships has come before the house. There was ... the Deceased Wife's Sister's Marriage Act, which finally became law in 1907, that ... ended the prohibition on a man marrying the sister of his dead wife ... No one reading the debates ... can but wonder (at reaction in) those days of yesteryear ... the passions that were aroused seem almost droll, and the threats to family stability and the institution of marriage ... now seem historical curiosities."

It's an instructive device. Suddenly we see the present in the image of the past. Abse’s prediction comes true, and ultimately the vote on same-sex marriage will be another Deceased Wife’s Marriage Act.  For most of us it alreadyt is. Some will only see this with the passage of time.

From this, two more general points came to mind:

To invoke an imagined posterity, with its radically different habits and values,  is of course a useful way of displacing and making strange the present, reminding us that what we might get passionate about will one day be seen as an arcane drollery or unjust or wrong.

The mistake is to think that time will do this all by itself; i.e., that given the passage of time certain practices and customs will be exposed as prejudicial, silly, irrational etc and others will be revealed to be just and reasonable. It’s not simply the passage of time, the gradual work of progress which reveals certain laws, habits, customs and values as quaint, redundant or wrong. It is forces of resistance, contestation. It’s people who make visible and de-naturalise our assumptions and values, And likewise, such laws continue as long as other forces maintain them. History is not the passage of time but the contestation of such forces.

The other point is that Parris’s trick of seeing the present as already historical is something that should always be strived for. To angle the present, to find a vantage point from which it appears as arcane and dusty, as empty of meaning, as ‘curious’ and ‘droll’ as those debates of yesteryear. There is always history and we are always inside it, and it is likely that much of which is to us uncontrived, natural and self-evident is from another point of view, contrived, bizarre and allied to a particular form of life that we lack the leverage to get outside.

But conversely, it is necessary to restore to those arcane and ‘merely historical’ debates the background of values, deeply internalised and taken for granted, which gave them meaning and passion. Not because of some antiquarian impulse, but so as to make our own background, by contrast, all the more visible.
Posted by Mark Bowles at 14:02 No comments: