Deleuze and Metaphor and Non-Metaphor

Deleuze often uses terms which seem obviously metaphorical but which he immediately insists are not metaphors. For example, the crystal in music - of Varese, Mozart and others:


Therefore it’s very complicated, and it all has interest only if you understand that these are not metaphors. It’s not a matter of saying that Mozart’s music is like a crystal, that would only be of minimal interest, it’s a matter of saying that the crystal is an active operator in Mozart’s techniques as well as in the conception of music that Mozart constructs for himself..

In composers such as Mozart and Varese the crystal is most audible. The commonsense understanding of this usage would be to say that what happens in the music of Varese or Mozart is like crystallisation, or is analogous to the crystal. The structure, the principle of construction is similar. The literal crystal is the best approximation we have in thinking about what's happening in the music, but it is an approximation. There isn't really a crystallisation process. So, the concept we are using to describe the music is a kind of shadow concept, a borrowed, secondary concept.

What can it mean, then, to deny that there is anything metaphorical. A number of provisional suggestions:

2. Within the philosophical work (as Deleuze sees it), immanently, a new concept of the crystal emerges - i.e., a new sense which is not just an attenuated or derivative version of the literal sense. Or when, for instance, we speak of 'reading' someone or 'reading' a situation, we are not just talking about a 'weaker' or imitative version of what we do (literally) with texts, rather we are using 'reading' in a new sense, a new concept has been created.We have put it to work in a new way, we have included it within a different composition of concepts, such that the old concept of reading has been surpassed. 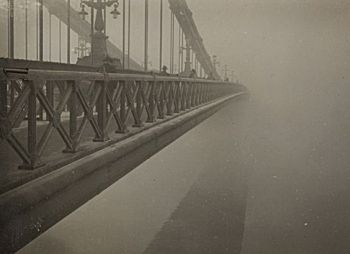 3. When we identify a literal crystal we do so with a concept which is bigger than that literal crystal. Or when we identify a bridge or a machine we do so with a concept which is always surplus to what we might call a literal bridge. If we  think about, say, the metaphor of the 'frame', it seems at first that an actual frame - that of a door or picture - is the literal level that then allows us to talk about figurative frames. But the other way of thinking about this is that when we identify the actual (literal) frame we are simply isolating and making visible a function, the framing function, which precedes and succeeds the actual (literal) frame. In this sense the metaphorical might be said to come before the literal.

[This last point is perhaps not clear. I'd like to return to it later.]