Deleuze, Hegel and emotion without individuality.


One of Deleuze’s interests is the way that art liberates affects from persons, traits from character: “when we see the face of a fleeing coward in close-up, wesee ‘cowardice’ in person, freed from its actualisation in a particular person.” 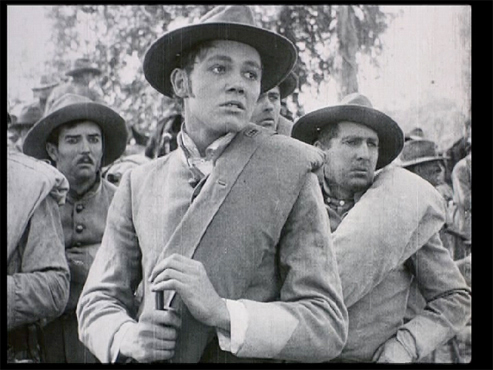 I thought of this, surprisingly perhaps, reading Hegel on Greek theatre.In Greek theatre, Hegel says, the actor is not there as the bearer of a character or personality, his function is to bring poetry to life.The actor come on stage as a ‘vitalised statue’ who “assimilates and expresses the subject-matter of the poetry”

“In short, in Greece words and the spiritual expression of serious passions had full poetic rights.. [T]he spiritual element is not independently inwardized or expressed in theh subjective experiences of these particular individuals.”

By contrast, “we [moderns] want to recognise in the tone of voice, in the enunciation, and in the manner of recitation, the characters heart and personality totally objectified in its most delicate nuances and transitions.”

The 'locus' of individual character is arguably the face, and

in Greece the actors wore masks and therefore the play of features was altogether absent. The facial expressions of the masks presented an unalterable statuesque picture and its plasticity inhibited both the ever-shifting expression of particular emotional moods and also the revelation of the dramatis personae. [They were] animated by a fixed and universal pathos, but the substance of this pathos had not been developed into the deep feeling of the modern heart nor was it broadened by being particularised in the dramatis personae as it is today.

For Hegel, this ‘general passion’ ('universal pathos') which has not yet been coloured and shaped by individuation, is an insufficiency, corresponding to an earlier historical stage of humanity and of art, before the development of the modern individual. As such, this earlier art is still striving, however blindly, toward an individuation it does not yet know.
But if we bracket off Hegel’s narrative of historical development, we have an art that does something very close to what Deleuze talks about.

In Greek theatre we have a situation where the actor is the instrument of speech rather than anything else, his task is to make language sing.  ‘Character’ here is not what we want to hear in the speech, we want, rather, to hear language (hence of course the wearing of masks). “words had full poetic rights”. So the function of the mask is not to suppress expression, to stifle the face as the locus of spirit, but rather to displace expression onto the voice, to surcharge the voice. The mask turns the voice into a disembodied power which no longer ‘borrows’ its authority from the individual who carries it. The voice, freed from its usual support, is free to embody affect without individuality.

A mask is also of course  a fixed attitude of woe, horror or joy, of affects that have not yet been  ‘particularized’ , i.e., they have not yet been woven into the fabric and story of an individual psychology.Thus we have a theatre, perhaps, where the stylised immobility of the actors is  in part a way of isolating and extracting certain ‘characteristics’, traits, from the complications of ‘character’. Affects and dispositions – joy, rage, love – are, as Deleuze says about cinema, liberated from the entanglement of a ‘who’. Perhaps Deleuze’s example of the coward’s face is cinema effectively turning the face into a mask.

Typically, when we see an attitude, an emotion,  embodied in an individual person it is contaminated by the ‘flavour’ of that person, our sense of their overall personality and status. This sense of their total personality colours and flavours the singular attitude – an expression of pain or surprise or whatever. When you have a mask, by contrast, the attitude achieves an effectiveness of its own.  It is a free-floating emotion, with an energy of its own unattached to ‘individual character’.It is such free-floating affects which Deleuze sees as the domain of art.
Posted by Mark Bowles at 08:36