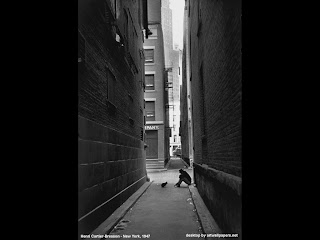 So in a previous post, I considered the idea of metaphor as 'cross domain mapping'. Metaphor involves not simply seeing one thing in terms of another, but seeing one area or domain in terms of another, for example time as space: 'Who knows what lies ahead of us' and 'Let's put that behind us' rest on the same habit of interpreting time as space. Thus  a common underlying conceptual structure can generate several metaphors. This underlying structure can often be expressed as a proposition, for example (Lakoff's) difficulties are impediments to movement, as in "we've reached a brick wall"; or Purposes are destinations, as in "we're seeing the light at the end of the tunnel".

But it seems to me that if we take the last two examples, the significant thing about these metaphors is not the way they conceptualise one domain as another. To elaborate, 'we've reached a brick wall" is about the affects of frustration, blockage  and exasperation; 'seeing the light at the end of the tunnel' is about the audible relief, the anticipation of freedom. In each case the metaphor is seeking out the object-equivalent of the affect. We begin with exasperation, frustration, or whatever, and seek out an object that carries the outline of this affect. The choice of object is in this sense secondary - i.e., whatever outlines the frustration is adequate, whether it be a brick wall or something else. That the metaphor involves equating 'purposes with destinations' is true enough but this is subordinate to the communication of affect.
Posted by Mark Bowles at 14:03