In a previous post I suggested that objects in fictional worlds are indefinite, co-extensive with their description, not open to question ('What kind of tree is the tree in Waiting for Godot, How high?)

Cinema is I suppose the opposite of this in some ways. It constructs fictional worlds using real-world objects and people. We can of course measure and examine the buildings in Bicycle Thieves. What is fictional is the relations between these things, and more generally 'what happens' in the film. Or rather, 'what happens' has both a real-world basis and a fictional counterpart. At the real-world level, an actor takes a bike leaning against a wall and and rides it along the street. On a fictional level, a man steals a bike.

Can one visit the City of Bicycle Thieves or only the Rome where the film was set? Perhaps this is not a clear distinction. But take the example of, say, Solaris. It is not possible to visit the space ship, for that is precisely the fictional object. The equivalent real-world object is the stage set used by Tarkovsky. One could say that in Bicycle Thieves, the real-world city is the stage set for the fictional 'object', the unnamed city of the film. The one fits the other like a glove, or nearly. Similarly in  Inspector Morse, the real-world Oxford is the stage-set for the fictional Oxford of the program. Of course there is never an exact fit. Morse steps through one college entrance and emerges in the quad of another half a mile away. Editing means that the two spaces are contiguous only on film. Time and space - in the sense of the implied spatial relations between places, the time taken to traverse certain spaces - are fictional. 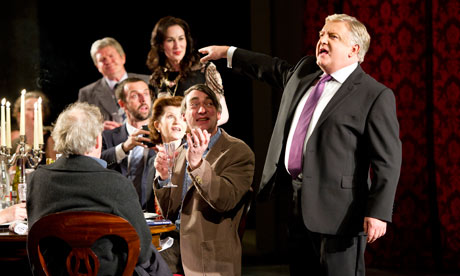 Theatre is presumably different again. On can describe Simon Russell Beale in minute detail but one has not therefore described Timon. Timon remains an imaginary object only signified by Beale. (By contrast, perhaps, the Terminator and Arnold Schwarzenegger are indissociable, some people even voted for the former.) No number of actors will ever exhaust Timon, very obviously. And the same is true of costume dramas, which, as has been pointed out in comments, must give a real habitation to fictional objects. Dickens' staircase will never be 'filled out' by any actual staircase, only signified.
Posted by Mark Bowles at 05:27