Received, from Shakespeare and Company, a very lovely first edition of An Anthology of Mexican Poetry, translated by Samuel Beckett: 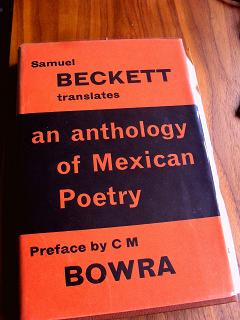 Inside was a 1964 New York Times article on Beckett working with Buster Keaton on Film. 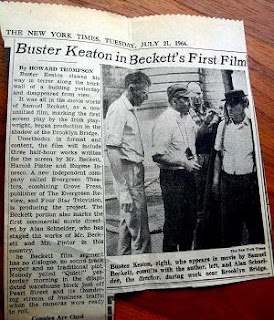 "The picture is about a man's self-perception," Mr. Beckett rather grudgingly acknowledged. The 58-year-old playwright-scenarist moved around gingerly on the fringes of the unit, joking with his colleagues and carefully checking each take with the director. Mr. Beckett, now visiting the United States for the first time, is a slender, wiry man with watchful eyes and a strong mouth dominating a leathery face.
"I've waited till now to write for films because I wanted to know film technique better," he said quietly. "No, I'm not too familiar with the recent experimental films, like the New Wave, but I was highly impressed by Italian ones like 'The Bicycle Theif' and 'La Strada.'"
Mr. Beckett is also a Buster Keaton fan, although he said the hero's part was originally written for an unavailable Irish actor who has appeared in his plays. "I used to see Buster's films when I was a boy in Dublin," Mr. Beckett added, smiling reminiscently.
Awaiting his entrance and flight along the brick wall, Mr. Keaton put on his familiar hat ("my flattened-down stetson"), a dangling coat, and smiled a greeting.
"No, I'll never smile on film," he declared, "Metro tried it once years ago and the audience hated me. What;s the picture about? Well, I'm not too sure myself. what I think it means is a man may keep away from everybody but he can't get away from himself".

The Metaphorical Outline of the Everyday

Soho in the early morning. Almost empty. People disinfecting steps. Doors open to receive deliveries or take bags of rubbish. Boxes and trays of vegetables left outside unopened restaurants. Setting up stalls in Berwick Street market. All this I prefer to Soho in the evening. Partly, no doubt, because of a preference for stillness (urban not rural)  over commotion. But also because this early morning Soho is a metaphorical outline of Possibility. Clearing the ground for something new. This quiet time, the quiet of a before rather than an after, 'the morning coming to consciousness,' is something I find appealing. It gives me an immediate, living metaphor for a sense of potential. And if, in Soho, I think about the idea of possibility then I am following what has already been given me in reality. If I open a new page in my notebook then this seems to mirror what is taking place outside. This seems rather obvious and perhaps it is.

To try another example, there are two cafes I go to in Soho before work, but I have a strong preference for the one over the other. The other is narrow, with little space between your table and the counter. The view onto the street is restricted, and the street itself is busy with market traders setting up stalls. If you try and write your thoughts feel cramped, blocked. The prefered cafe, on the other hand, is on an unexpected and quiet sidestreet. More spacious, airy, the full-length front window folds back completely, removing the barrier to the street. And you have the vignette of an alley through which Soho square can be glimpsed as a rectangle of greenery and sunshine. This, incidentally is the view pictured at the top of this blog. We might say that this is a metaphorical outline of what (for me) thought requires: the protection afforded by an interior but openness to and commerce with the outside; the alley is a vista focusing the gaze.The actual cafe traces a metaphorical outline of thought itself, and this is in part why I find it more condusive to writing.

Of course, it is only when I am thinking about why I prefer the cafe, or Soho in the morning, that the idea of a metaphorical outline is posited. Ordinarily it remains mute and implicit. It is only thinking which translates it into language. It is one of those silent metaphors which, i think, help organise or signpost our day.

[More on this idea, hopefully, later]
Posted by Mark Bowles at 11:54 No comments:

In the Paris Metro there are different voices for different lines. On the one line a woman announces ‘Rome.. Rome’ in a questioning voice, more accented on the second 'Rome', slightly lost, as if asking "Rome, are you there? What happened to Rome?" On another line a man announces Wagram, in a resigned, careless voice – “Here, for what it’s worth, is Wagram”. You feel that behind these intonations there is a character and an untold story. Rome is melancholy, Wagram merely depressed.
Posted by Mark Bowles at 07:35 1 comment:

Sturrock's review of Sartre's War Diaries in the LRB.

"He is like Stendhal, who wrote that all his life reality had escaped him because for him to see was to think and reality inescapably an idea."

In this sentence, and elsewhere in the review, we find the canard that thought 'detaches' you from the world. The writer or philospher is sequestered in a world of mere ideas.  Au Contraire:


We talk about people being ‘unthinkingly involved’ in the world, by which we mean that routine, custom, habit, have made the world invisible. It is thinking which disrupts habit and custom and makes the world newly and strangely available. In this sense, thought draws you closer to the world, albeit in a different way. Things become problematic, objects of curiosity, vivid and niggling, alive and present. We become thinkingly involved in the world.

And in Sartre the everyday world, the quotidian, is repeatedly the cue for and the object of thinking – thinking only operates through worldy concern. He is, surely, one of the philosophers who brought thinking out of the academy and into the street.
Posted by Mark Bowles at 06:01 No comments:

Every now and then I heard the sound of the lift coming up, but it was followed by a second sound, not the one I was hoping for, namely its coming to a halt at our landing, but another very different sound which the lift made in continuing its progress to the floors above and which, because it so often meant the desertion of my floor when I was expecting a visitor, remained for me later, even when I had ceased to wish for visitors, a sound lugubrious in itself, in which there echoed, as it were, a sentence of solitary confinement.

Proust is very aware of the way in which emotions come to be housed in objects, come to assume the shapes, smells, colours and sounds of the external world.  And the individual’s will, unaided, cannot then bring these emotions back, for they dwell outside us.

In the example above, it is as if the ‘lugubrious’ emotion comes to ‘agree’ with the sound of the lift, comes, like water in a glass, to assume the shape of its container, so that even when the emotion’s initial context has vanished (‘when I had ceased to wish for visitors’), the presence of the container - the lift's noise - enables one to again taste the melancholy pleasure.

The sound of the lift here functions like a word, but a word in a wordless language; a word which instantly summons and is wholly at one with its meaning.

And it is this which is raised to a second power, made self-conscious and purposeful, by art and literature, which involves housing emotion in the forms and shapes of language or paint, clay or notes, where they persist and reside long after the artist is dead.
Posted by Mark Bowles at 10:12 No comments:

Years ago, as part of a creative writing class, I composed a series of sonnets, conforming exactly to the set form. This was done over a number of weeks. At the end of the exercise I was intrigued to find the same stubborn themes surfacing repeatedly. This was a kind of side-effect of following the technical exercise, yet this 'side-effect' eclipsed in importance the exercise itself. The form of the sonnet was something foreign, indifferent to my concerns, but precisely on that account returned me to those concerns.

Form and its contraints act as a force of both irritation and attraction for thought and affect. Only through this irritation-attraction is something disclosed in its clarity. And the content of this disclosure is not something that one could have anticipated in advance.
Posted by Mark Bowles at 05:06 No comments:

Materialisation (What is 'expression'?)

In the previous post I was thinking about how thought and affect are materialised through language.
But this process of ‘materialisation’ does not only describe the crossover from thought and affect into a form of words. Thought and emotion also of course come to know themselves, achieve material clarity through things in the world – a ruined abbey, a peaceful river, the jumpy energy of a crowd in a foreign city. These things will (so to speak) explicate our thoughts and feelings for us, they will act as a ‘voiceless language’, in which the unconscious domain mentioned previously will come to rest, disclose itself..

Thought and feeling articulate themselves through that constellation of examples and figures that the world provides for us.It is not that we project emotion or thought outward onto these things. For that implies that the thoughts are already fashioned and require only to be transferred onto an object. Rather do we receive from them, the realm of objects, what it is we are thinking and feeling. ‘What we are thinking and feeling’ is therefore something that emerges retroactively, post 'expression'.
Posted by Mark Bowles at 07:01 No comments:

Say I have some thoughts about X subject that I want to write down. I’m not entirely sure what these thoughts are, although a few are clear. In the process of writing I realise and clarify what it is I want to say. This seems fairly commonplace but what, more exactly, is going on here?

Note that ‘what I wanted to say’ is a bit of a misnomer in so far as I could not have articulated this ‘what’ – not articulated it cleanly and completely – prior to writing. Through writing I discovered not just the words but my thoughts. I gave them form, yes, but the forms of writing also disclosed their content.

On the other hand, ‘what I wanted to say’ really did pre-exist this materialisation, in that when written down I recognised that it was in indeed this that had been in my head.  ‘What I wanted to say’ therefore existed at some level, a level we can legitimately call ‘unconscious’. It must therefore make sense to say that we have formless, virtual thoughts that do not ‘know themselves,’ and await the materialisation of writing, or even just an interval of reflection – to attain daylight.

It is only when you start dealing with a signifying system, a shared language, its lexicon and syntax, that thoughts and feelings achieve actual content.Language is something impersonal, extrinsic, that we nonetheless require to drag the intimate (the formless thoughts) into daylight.
Posted by Mark Bowles at 07:07 No comments: